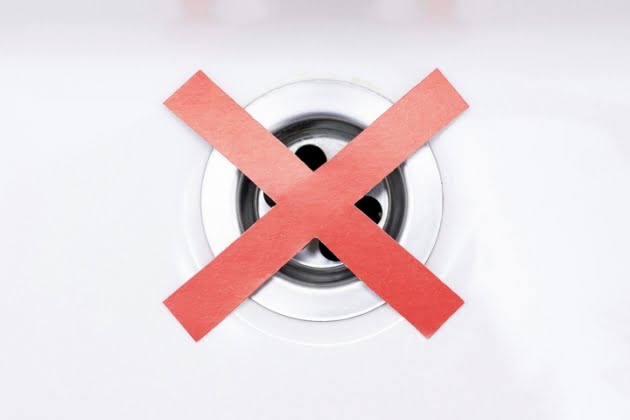 Whether you are preparing a quick meal or a full-course dinner, some food waste is likely produced in your kitchen. When it’s time to clean up, you may be tempted to pour the waste down the drain due to convenience. Unfortunately, this is a recipe for a plumbing disaster. Some homeowners mistakenly assume that certain items can be put into the drain, but that isn’t the case at all.

While a garbage disposal makes life easier, the system is not designed to be an all-in-one landfill. If you are lucky, you won’t encounter a plumbing problem the first time you discard a prohibited item. However, the risk increases every time you repeat the same mistake. If you keep pouring oil or grease down the drain, your plumbing will eventually suffer from smelly and stinky consequences.

A plumber can fix many issues with your kitchen sink and drain, even if you poured down the wrong things. However, these mishaps can be avoided if you learned what not to put down the drain. By being aware and diligent of what cannot be disposed, you protect the longevity in your plumbing system.

The following are eight household items you can never put down the drain:

Can you put flour down the drain?

No, flour should not be put down your drain. Think about the result you get when you mix flour with water. It creates a substance, which can be used as an alternative to glue. The same result is replicated when you pour flour down the drain. Too much flour will eventually lead to a clog and even jam your garbage disposal.

Just like with pasta and rice, a small amount of flour probably won’t be harmful to your plumbing system. However, the risk increases significantly if you pour a full cup of flour down the drain. If this keeps happening, you will likely need to call a residential plumber to fix the long-term damage.

Can you put coffee grounds down the sink?

Instead, try incorporating the coffee grounds into your compost. Coffee grounds also make a great natural deterrent to garden pests. Just sprinkle them around the perimeter of your garden and watch those unwanted insects scurry away.

Can you pour vegetable oil down the drain?

No, avoid pouring vegetable oil down the drain. There is a common misconception that vegetable oil won’t harm your drains just because it’s a liquid. However, it’s important to note that vegetable oil doesn’t behave in the same way as other liquids. While it may look like the oil goes into the drain smoothly, it will cling to your pipes once the liquid cools down.

Over time, the coating of the oil will build up in your drains and pipes. This will result in stubborn clogs and severe blockages. Instead, dispose of the vegetable oil by pouring it into a container before dispatching it into a trashcan.

Can you pour cooking oil down the drain?

No, cooking oil should never go down the drain. Cooking oil congeals and solidifies when it cools. This eventually leads to the formation of blockages. Even if you manage to break down the oil using hot water and soap, it will re-solidify when cooled down. Oil can also make its way into waterways like rivers, creating pollution.

Can you pour milk down the drain?

No, do not pour milk down the drain. You may have made the mistake of pouring expired milk down the drain, believing it is a harmless liquid. However, discarding it this way can have a major environmental impact. In fact, some places fine businesses if they use this method of disposal.

The explanation is that the process of breaking down milk uses a significant amount of oxygen. By the time the process is completed, less oxygen is left for the living things that rely on it. Milk in large quantities is capable of suffocating entire ecosystems. Things like cream, butter, cheese, and yogurt can also have the same devastating impact.

Can you put bacon grease down the drain?

No, it is not a good idea to pour bacon grease down the drain. When you fry your bacon, the grease is in liquid form. However, it cools quickly after you dump it down the drain, causing the liquid to congeal and solidify. The bacon grease will form a non-soluble clog that clings to the pipe walls.

Can you pour paint down the drain?

No, never pour paint down the drain. This applies to water-based and oil-based paints, neither of which should go into the sink. Most areas have rules and regulations in place concerning the disposal of paints. Some regulations are so strict that even washing out paintbrushes inside a sink isn’t allowed.

The issue here isn’t about the condition of the pipes. It’s the number of chemicals and toxins in the paint that can make their way into the water supply. Depending on where you live, you may have to look for a hazardous waste facility to dispose the paint.

Can you put bleach down the drain?

No, don’t put bleach down the drain. Pouring bleach will do more harm than good to your plumbing system. Bleach is a toxic and powerful substance that should always be handled carefully. It will react with other trapped substances in your pipes, which can potentially release fumes or further clog the system.

A Marco Plumbing Ltd. always puts the safety of our customers and our staff at the top of our priority list.  This has never been more important than it is now.

As we continue to monitor the progression of the Covid-19 virus and follow the advice set forth by the Public Health Agency of Canada we are taking measures in the effort to keep our community safe.  As we have been deemed an essential service, we are applying all precautionary practices to help prevent the spread of the virus.

For all service calls we are taking the following measures to protect our customers:

WE are committed to continuing to provide you with highest level of service during this time and I hope this gives you confidence in the actions we are taking on your behalf. We remain committed to providing you with safe, reliable and professional service.