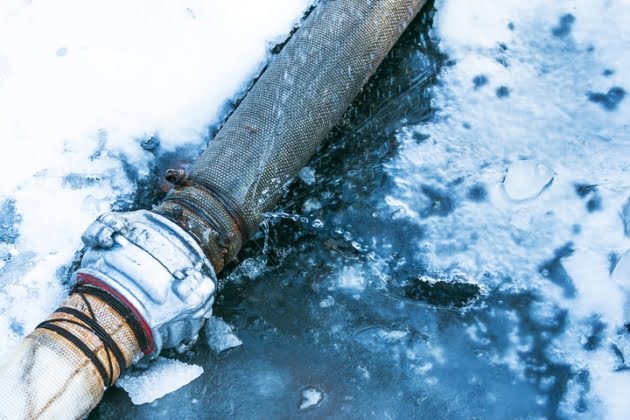 Freezing water is a common cause of burst pipes. This occurs because water molecules expand in cold temperatures, which exert a significant amount of pressure on the pipes. During winter, the chances of coming across a burst pipe are very high. With sub-zero temperatures and icy weather conditions, both your outdoor and indoor plumbing pipes are vulnerable to rupture.

Speed is of the essence for preventing burst pipes in winter. Delays are likely to aggravate the problem. If left unattended for too long, the burst pipes may cause you a severe flooding situation in the coldest season of the year. Before that happens, you should seek emergency help from a professional plumber when your pipes burst.

Once a pipe has deteriorated to the breaking point, it starts communicating to you by way of subtle signs that all is not well. From the gurgling sounds to the terrible sewage odours, the burst pipes are trying to get your attention. Here are six potential signs of a burst pipe in winter that you need to watch out for:

Hot water during winter is not a luxury; it’s a necessity. After a freezing day outdoors, you won’t want to turn on the tap and get splashed by a cold burst of water. This gets even more unpleasant if you are in the middle of taking a shower, where the hot water suddenly goes cold.

If it never feels like the warm water is working in winter, there could be an issue with your piping system. A burst pipe affects the flow of water and compromises the heating mechanism, causing the temperature to drop. Since this problem can severely limit your access to hot water in winter, it demands immediate action.

Water pressure does not fluctuate for no reason. The moment that water pressure in your house starts to fluctuate, don’t be quick to blame your water supplier. While it might be true that the supply is erratic, this is also a possible sign of a burst pipe somewhere in the system.

The water pressure tends to fluctuate when there is air trapped inside the pipes. In winter, cold air enters through a burst pipe, which then causes disruptions to the regular water flow. If you notice weird patterns in the water pressure levels, ask an emergency plumber to confirm what the problem is first. Fluctuations in water pressure could precipitate other serious issues, such as damaged pipe fittings.

Have you noticed several stains on the walls of your house? The culprit could be those water lines running inside the walls. If any of them breaks, the evidence will be in the form of visible stains on the walls. That blot on your ceiling or wall, which was not there before, is a sure sign of a burst pipe.

Puddles are another common sign of a burst pipe somewhere in the plumbing system. Any time you notice a pool of water gathering inexplicably, there could be a plumbing problem. You may have a burst pipe if you suddenly notice water puddles around toilet bases, sinks, faucets, laundry machines, and other appliances. Get this problem fixed as soon as possible to prevent a potential flooding crisis.

Do you hear a strange gurling or bubbling noise emitting from your pipes? Whenever there is a crack in the pipe, the air gets in and produces this sound after flushing a toilet or running a faucet. The fluctuating air pressure is what causes the gurgling noises inside the pipes. Leaky pipes always result in fluctuating water pressure and the ensuing scary noises.

Should you witness the strange noise while water is flowing, it means the problem could be elsewhere in your plumbing system. You should contact an experienced plumber to investigate until you get to the root cause.

Another weird sound you may hear is water running somewhere in your house. If there’s no running faucet, no flushing toilet, and nobody is taking a shower, then you shouldn’t hear this type of noise. Water runs to go somewhere: to sinks, toilets, basins, and the plumbing systems in your house. When you hear water running from a seemingly mysterious source, it’s almost always a broken pipe.

A breakage in the pipe is a potential cause of the foul smell seeping out of the drains, toilets, faucets, or sinks. That undeniable sewage-like smell wafting throughout your house is likely being caused by a burst pipe. This odour can be hard to live with, especially during winter since you don’t have the luxury of spending time outdoors. Get the problem fixed as soon as possible with the help of a local plumber.

Most ceilings and walls are designed to blend in with the surroundings, so they don’t usually catch your attention. However, it’s possible that you notice something off-putting about their structural appearance. Upon closer inspection, you may find a strange bulge poking out of your ceilings and walls. This physical deformation occurs when water has been gathering for a while, due to a leaky pipe in the ceilings or behind the walls.

When you notice a leak in your home, turn off the main water supply. Since there will still be water lodged in the pipes, your next step is to turn on all the taps to empty whatever water remains. Do this as quickly as possible to limit the extent of the water damage, and then quickly call an emergency plumber to get the burst pipes repaired.

A Marco Plumbing Ltd. always puts the safety of our customers and our staff at the top of our priority list.  This has never been more important than it is now.

As we continue to monitor the progression of the Covid-19 virus and follow the advice set forth by the Public Health Agency of Canada we are taking measures in the effort to keep our community safe.  As we have been deemed an essential service, we are applying all precautionary practices to help prevent the spread of the virus.

For all service calls we are taking the following measures to protect our customers:

WE are committed to continuing to provide you with highest level of service during this time and I hope this gives you confidence in the actions we are taking on your behalf. We remain committed to providing you with safe, reliable and professional service.